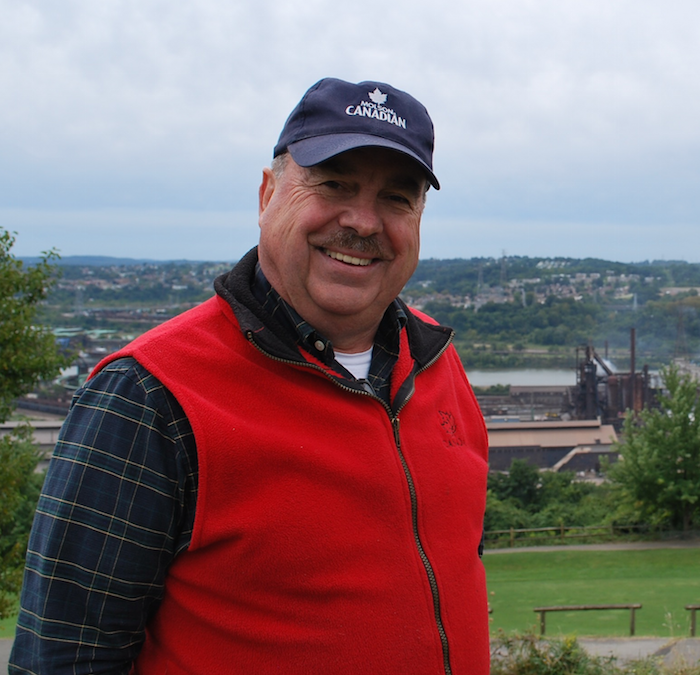 As we start the tour of Grand View Golf Club in North Braddock, my guide North Braddock native and former state representative Tom Michlovic sweeps his hand over the precisely trimmed greens and fairways of the first hole. “All this,” he says “used to be a 50 foot high slag heap.” That this lush landscape could have ever been a barren grey hill of slag is just one of the many surprises you’ll find at Grand View.

Grand View is one of the best-kept secrets in the region. Not only is it one of the area’s most technically challenging and topographically unique golf courses, but the views from its perch on top of Matta’s Hill in North Braddock might just compete with Mt. Washington for the most spectacular in the region.

The view from the clubhouse’s windows is outstanding. If you look to west, the tops of Downtown Pittsburgh’s skyscrapers and the Cathedral of Learning are visible rising above the city’s hills. Below, the Monongahela comes into view as it curves around a bend in Homestead before passing by the Carrie Furnaces in Swissvale and Rankin and then flowing past Braddock. At hole ten the trees frame the art deco George Westinghouse Bridge, one of the largest concrete arch bridges in the United States. 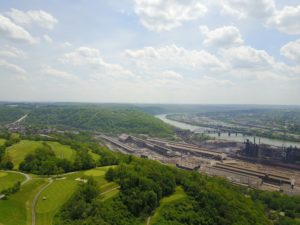 View over Grand View and the Edgar Thompson Works

U.S. Steel’s Edgar Thompson Works, the last major steel mill in western Pennsylvania, forms the backdrop of the front nine. This impressive site is where Carnegie pioneered the Bessemer process, transforming the steel industry and cementing Pittsburgh’s status as the steel capital of the world. Michlovic mentions that in the past, when the mill’s 18 blast furnaces were working at full tilt, there were days where the smoke was so dense it was impossible to see Kennywood amusement park just across the river.

Pittsburgh’s landscape and industrial history also combine to create a challenging series of holes. For example, hole 14 was carved out of a former quarry and features a dramatic 90-foot elevation change between the tee box and the green. For reference, this is the equivalent to teeing off the roof of an eight-story building. The course’s signature hole, 15, is located at the bottom of a steep, almost v-shaped, valley. 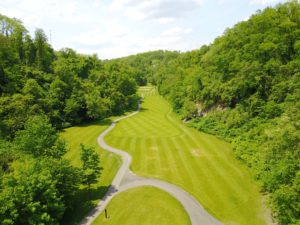 Steve Mendelson, owner of Mendelson Gallery in Shadyside, golfs frequently at the course and says that Grand View rewards golfers who play with patience and precision. “This is a course where you could shoot an 85 one day, and a 105 the next; I would avoid using a driver,” he says, but adds that despite the difficulty, “Grand View is still one of the most unique places I’ve ever played.” Mendelson also states that unlike other golf clubs which cater to exclusive clientele, Grand View seems to be embraced by the local community. Indeed, as Tom Michlovic mentions, creating a golf club for the Monongahela Valley was one of the group of investor’s original goals. 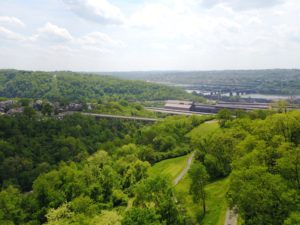 View over the back nine at Grand View

“The idea behind Grand View,” Michlovic explains, “was to create a ‘workingman’s country club.’ When you think of country clubs you think of fine rolled greens and tight well-kept fairways and roughs. And we’ve made it a point that this is our signature. This is a primo-conditioned course in the heart of an industrial town at affordable rates, and we’ve lived up to that vision.”